There was Monkey, swinging on the branches of his favored tree that leaned into the river, thinking of what mischief to make next (for it had been awhile and the time for a food festival was anon). As he looked down at the water flowing along, inspiration struck. Why not take a stab at making some Coastal delicacies from the two southern states of Kerala and Karnataka, with his own very monkey twist? And so he went to his kitchen to muse, muddle, meddle – finally presenting to the world (well, Bangalore and Delhi): Coastal Adventures, a two-week long promotion featuring 15 fiery, tangy and rather delicious dishes.

Monkey’s also got four specially muddled brews for you that are all interesting and actually pack a punch. Soulful Kadhee – a gin, kokum syrup, tender coconut, curry leaves, lime cordial concoction;Vanakam Panakam – whiskey, panakam, lemon juice; Chilli Puli – tequila, tamarind paste, green chilli; Kapi Macha – dark rum, espresso, pineapple juice and cinnamon. I sneaked a taste of every one, even the coffee cocktail and for someone who hates the smell and taste of it, I actually liked the way the drink came together and recommend that it’s the drink you end your meal on – bit strong flavors for a first drink. Every cocktail had a distinct flavor and I loved the addition of some spice or the other (curry leaf, green chilli, cinnamon, tamarind paste) as well as distinctive local elements like kokum and panakam. 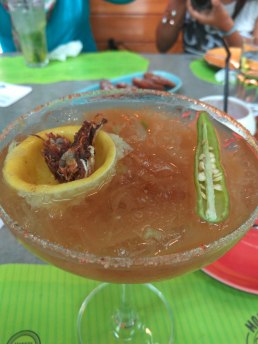 The first offering from Mr. Monkey was a red rice, baby spinach Kuttari salad topped with slivers of mango and coconut, and peanuts, tossed in a classic tadka of mustard and red chilli and finished off with lemon juice…we all dug into it with gusto. The rava-encrusted Udupi Beet Cutlets served with Kerala parathas that were perfectly flaky didn’t garner too much love from the non vegetarians who focused rather on the KP Chicken Tacos, where Kerala coin parathas played host to the pepper spiced and onion laced chicken pieces and garlic pickle. The Southern Fry, a bowl of batter fried calamari and shrimp, was made short work of. The Kundapur Chicken Wings were too high on spice for me, but would go really well with beer and was quite a hit with those for better tolerance of chilli than moi.

The Kerala Bao Uthapam – beef fry with fluffy baos that were given the uttapam treatment and decorated with tempered black mustard seeds, was oh-so-good, as was a dish I wasn’t sure I would take to – Monkee Eggs, basically an Indianized Eggs Benedict (a dish I adore and hardly ever find made to my taste, locally). Coriander and black pepper crusted poached egg on puff pastry, with green chutney and a coconut cream hollandaise made for a beautiful bite. The Prawn Ghee Roast was meh in my book – and I admit because it was called ghee roast, which it didn’t really resemble. I will be the first to say that all the dishes were with that indomitable monkey twist, but this one didn’t really work for me – but I did like the innovation of garlic toast on the side.

While the majority of dishes are for the non-vegetarian, there are four for the vegetarians, and since my DoD (dish of the day) was actually that Kuttari salad, with the Monkee Eggs coming in a close second, the vegetarian will have something to savor. Well done, Monkey – Mischief Made – and Much Enjoyed! 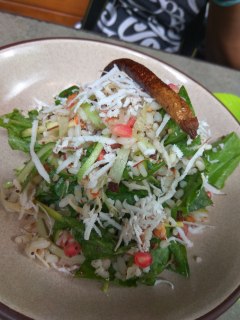