If you ask for some of the best seafood in town, you’re more than likely to be directed to Karavalli, The Gateway Hotel’s (Residency Road, Bangalore) southern coastal food restaurant. Food from Kerala, Mangalore, and the Konkan coast have been delighting palates for many a year now. And Chef Naren, who began his career with the restaurant’s start, remains at the helm even today – synonymous with Karavalli for many of us. Celebrating their 26th anniversary recently, Chef decided that instead of the “usual” lunch/dinner special in honor of the occasion, he would open Karavalli for breakfast for one weekend, and serve specialty Syro Malabar Christian dishes. Thus it was that this past weekend saw many happy folks enjoying the beautiful space while indulging in a full on feast for breakfast.

For someone like me, who is not a big breakfaster, this was a repast sumptuous indeed! Presented in the usual Karavalli style of a plate covered with a banana leaf and adored with a series of bowls (to hold the various curries), we were also served a glass of bubbly (cheers to 26!). We stared with a delicate Chayaa Vazhapoo cutlet (banana blossom) and then it was time for Dosa, Appam, Red rice Puttu, Porotta and Idiappam – oh my! And there was such deliciousness to dip them into – Meen Moilee (traditional accompaniment of the Vellayappam), Mutton Stew, Kadala Curry (to be eaten with the Puttu), Mutta Roast and a Chicken gravy as well. 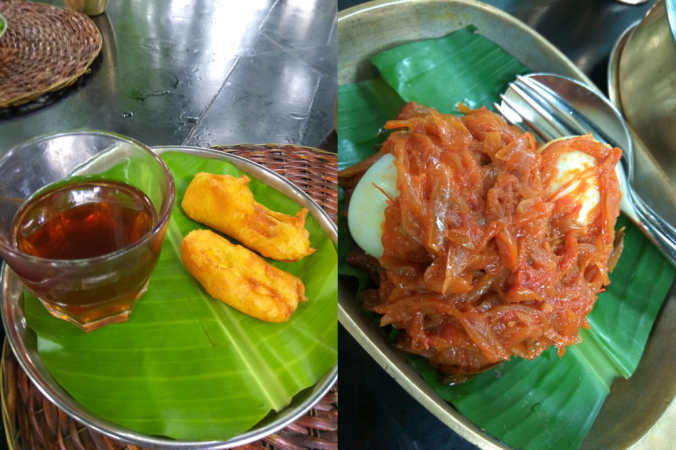 The “ishtew” was fantastic and took me back to childhood meals of Idiappam and stew at home, while the Meen Moilee was another bowl I dipped into until the end. The Puttu too, took me back – to meals at a neighbor’s home and to the only person who calls me “Chechi” – or any other form of big sister, for that matter, since I’ve never been one for being or calling, anyone akka or didi. We ended our meal with banana fritters and Sulemani style chai – that Kerala theme ran through the entire meal! While Chef Naren doesn’t plan to make breakfast a regular occurrence at Karavalli, he may just surprise us with more pop-ups here and there – and I for one, am sure looking forward to it!