Mangalorean cuisine is something I got introduced to rather late in my life – only in the last four years of living in Bangalore and having some very good Mangalorean friends, and spending one Christmas in Mangalore at a friend’s parents’, has the cuisine and culture become a part of my life. And I do love it! Whether it’s the simple Neer Dosa or the delectable Chicken Ghee Roast or anything in Sukka prep, or the Sannas, which, while bearing a passing resemblance to the Idli, are much more to my liking than the latter, which I’ve never been a fan of – I heart the cuisine. Now, I am not a big fish eater, especially the more pungent varieties, but fried Kane (Lady Fish) is something I’ve taken a shine to, and learned to eat quite well too, cleaning it to its entire internal structure without any difficulty.

The current Mangalorean Food Festival at Shangri-La Hotel’s b Café, was another perfect opportunity to indulge in my love for the coastal cuisine, and it is a giant spread indeed that Chef Rounak Kinger and his team have put together. It’s quite the food trail, with four distinct sections of the expansive buffet being taken over by Mangaluru dishes (at dinner time; during lunch it will be a more circumspect spread), featuring appetizers, snacks, mains, desserts, and definitely not to be missed, specially concocted drinks!

The Kokum Sour (whiskey, kokum, bitters) was a fast favorite that we kept company with throughout our meal, though the Panakam (vodka, jiggery, spices) and Amrut (tender coconut water, mint, lime – and if you so desire, white rum) will also have you asking for more.

GSB, Bunt, Catholic, and Udupi style dishes are showcased, with Chef Rounak and a few others from his team having taken a trip to Mangalore, met and learned from local Chefs and home cooks, before coming up with their menu for the festival. They even had Ms. Komal Prabhu, a restaurateur from Mangalore, overseeing the proceedings for the first few days. The hand drawn, chalk board signs across the spread were creative, eye-catching and added some artistry to the buffet, as did the specially procured matkas and the entire section of fried snacks and spices that the team brought back from their Mangalore visit!

We tried to get a taste of each dish from the Mangalorean spread, but it really was too vast to actually accomplish. So here are some of the highlights, then. They have a counter for a Mangalore street food, a version of bhel puri, called Churimuri, flavored with coconut oil, bestowing it a most unique taste. The Kane fish were served upright, lined up on a cute little stand, with wooden clothes pegs holding them up – I ate two, they were so good. The Anjal (seer fish) Tava Fry was excellent too, and there was a stronger fish that was just beyond my comfort zone, though I loved the crispy, Silver Fish Rava Fry that are to be eaten whole. Crunchy goodness, that! 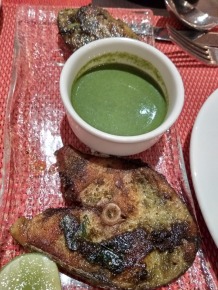 Kane in the Wind!

Of the mains, the Chicken Ghee Roast, Mutton Green Curry (amazing flavor and totally new taste for me), Beetroot Curry (again, fantastic flavors), Beef Curry (I could not get over how tender the beef was, and the coconut milk infused taste of each morsel of meat), Clams Sukka (I would not miss this if you like shellfish!) and Black Channa Gassi were the standouts. Boiled rice, Sannas (mini sized but still fluffy) and Neer Dosa were what we chose as accompaniments. There was a dozen other dishes, veg and non-veg, that we didn’t get to, including a prawn curry and Paneer Urwal. There was no Gadbad icecream, but we did round out the meal with a selection of desserts including Green Tea Icecream! All in all, a superb meal we found ourselves talking about for the rest of the night and into the next day. So, if you get the chance, definitely visit the #MangaluruFoodFestival at b Cafe before it ends! 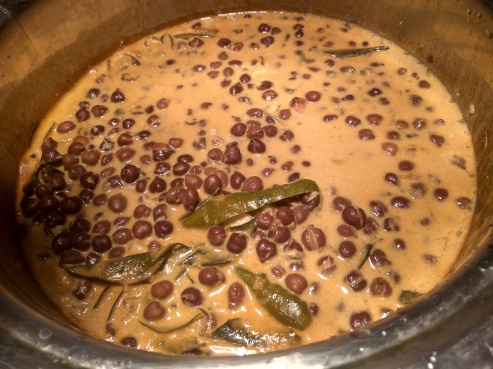