October was a tumultuous month for me (resulting in zero blog posts, I should admit), with the bright spots being far and few between. And the dinner I was part of at Le Cirque Signature, Leela Palace Bangalore, was definitely one of those high notes of the month. The original Le Cirque has been around since 1974 – I grew up reading novels where meals and rendezvous would be set up at the iconic NYC establishment, known for its exquisite take on French and Italian cuisine. Over the years, Le Cirque in NYC has changed locations, and set up additional restaurants as well. For the past couple of years, select Leela Palace Hotels in India too, have become home to the Le Cirque brand. Part of a series of dinners hosted to showcase Le Cirque specialties and signature dishes, the dinner I attended last month at The Leela Palace Bangalore, was elegant and delightful, supported by good wine.

Soup in the making 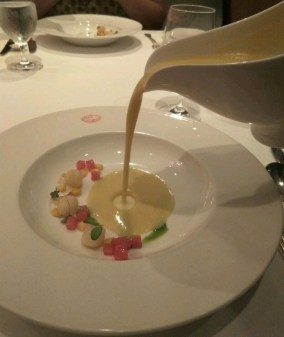 The amuse bouche that started us off was of mozzarella cheese atop a halved artichoke, served with artichoke puree and black truffle oil. This really set the tone of things to come – elegance, simplicity, and fantastic, flavorful food all the way! The salad course was one of the restaurant’s signatures, the eponymous Le Cirque Salad, a mix of arugula, lollo rosso, segmented orange, berries, mint, beets, figs, celery, carrot, toasted sunflower seeds, lemon and oregano dressing – citrusy and light, with a lot of crunch and freshness. Corn Soup was next, with a choice of shrimp or Brie fritters – I ended up with the latter, and while the soup itself was lovely (a bit sweet and with some interesting texture thanks to the bits of tomato and the thick but smooth liquid), I think the shrimp did a lot more in terms of flavor than the fried cheese.

I was most excited about the next dish on our menu – Risotto! This is one of my all-time favorite foods to eat – it is comfort food and fine dining rolled into one. And when its a black truffle risotto, well then that makes it all the more mouthwatering! Vialone nano rice, black truffle pesto and shavings, topped with burrata cheese – the reverence that such a dish calls for was established by the silence as I smelled and then tasted and then wiped clean the plate in front of me.

Pasta Primavera is not just a Le Cirque signature dish, it was created by Chef Sirio Macccioni and presented at Le Cirque in the mid 70s and became one of the restaurant’s most famous and talked about offerings, remaining even to date, a much in demand item even though it’s not on the menu anymore. It’s one of those seemingly simple pasta preps, with butter and cream, fresh veggies, and spaghetti. It is in fact, the kind of pasta dish that authentic Italian is famous for, where a smattering of ingredients come together to transport the diner to a different plane! 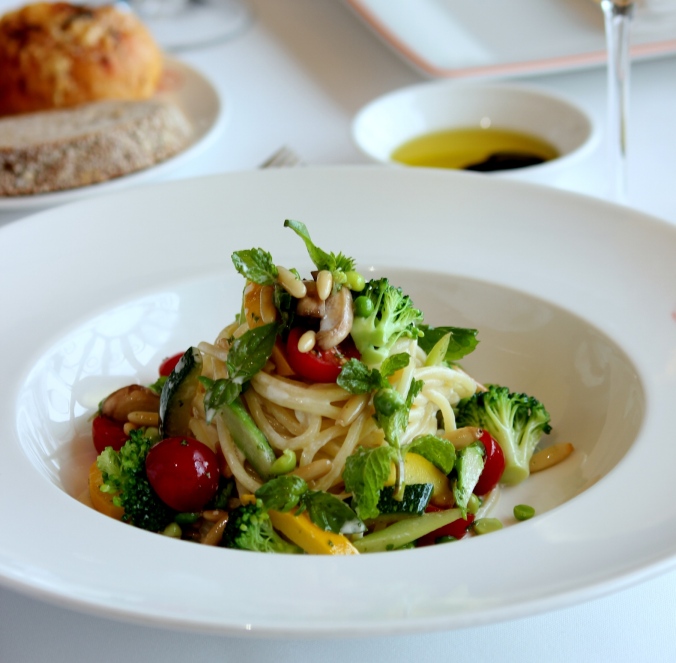 A palate cleansing sorbet of Limoncello with candied lemon came as a break before the main courses arrived, and for any lemon and tart flavor lover, this was a moment of happiness – strong lemon flavor that made one’s mouth pucker. I had chosen the Chicken Diable for my main course, among the options of that, the vegetarian Trio of Parmigiana, and the pescatarian Paupiette. The Paupiette was a pastry of Halibut, potato crust, stewed leek, and Rocca di Frassinello red wine sauce and won much favor at the table. For me however, the chicken was the perfect choice. Again, that perfect mix of haute cuisine and comfort food, it was pan seared chicken breast, Dijon mustard sauce, morel mushrooms, potatoes, shallots, and chicken jus. And oh, what a jus – that gravy on top was just incredible and really upped the delicious quotient of that chicken! 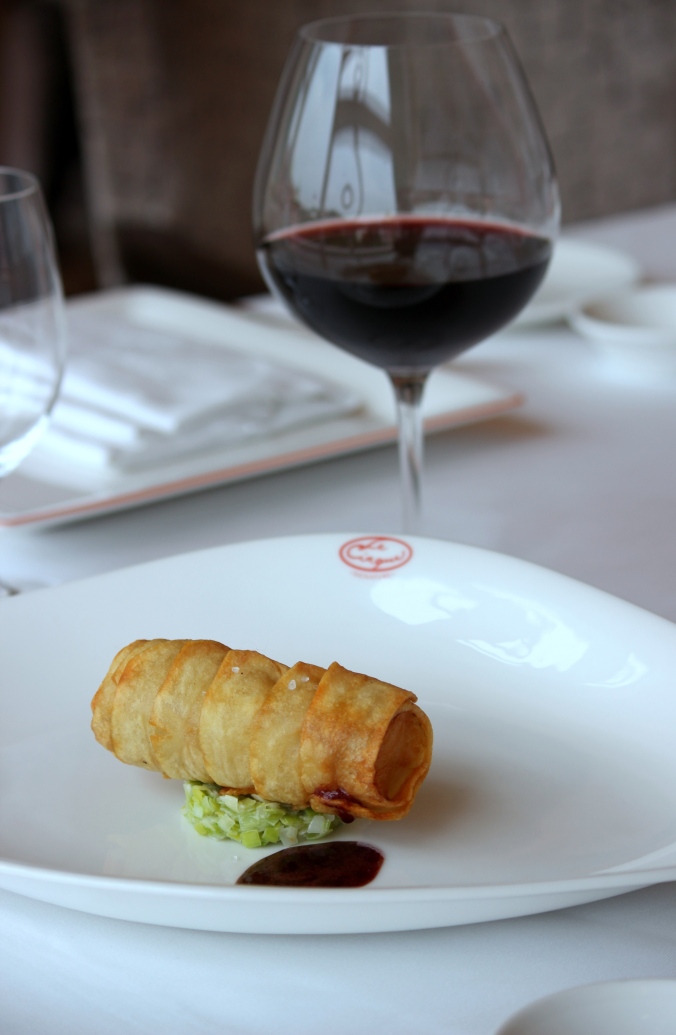 However, believe it or not, the piece de resistance was still to come, in the form of the dessert served – Crème Brûlée. I have eaten a couple great, some good Crème Brûlées, and many a mediocre one in my life, but this one was second to none. Served in an individual dish, it was a good portion and we all expected to be unable to finish it seeing as we were already sated from all that had come before. But when one is presented with greatness, one must give it the respect it commands, and in this case, that meant cracking into that beautifully caramelized top layer and scooping up every bite of the creamy center (which had black dots denoting its real vanilla bean heritage) and scraping the bottom of the dish. And then what did I spy? A recipe for this Queen of Crème Brûlées! A nice touch, though I daresay there are enough like me who would be too intimidated to try recreating it! 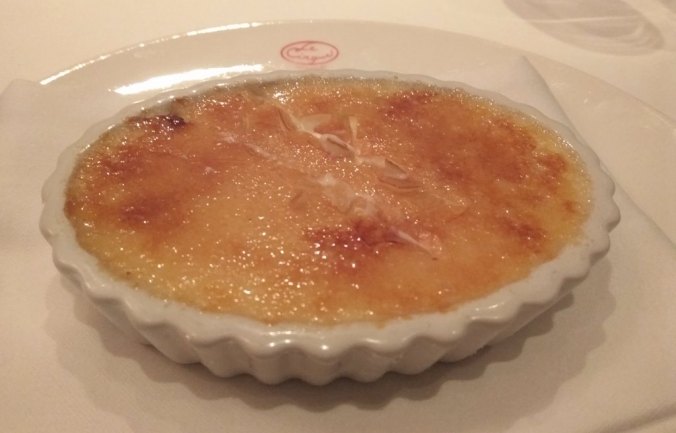 A meal at Le Cirque goes into the category of experiential dining, rather than satisfying one’s hunger. It is, as is to be expected, also an expensive place to dine – but that really should not stop you! When you have something to celebrate, be it a promotion, special birthday or anniversary, this is where you should plan on satiating your senses…