The buzz around Farzi Cafe started many weeks before the restaurant actually opened its doors to the Bangalore public. Word of the opening of this Massive Restaurants chain’s Bangalore branch (in UB City, no less!) evoked much excitement – in fact, now, many months later, it is still difficult to get a reservation on a weekend and the place is almost always packed. Calling itself a “Modern Indian Bistro”, Farzi Cafe is high on the jinks – molecular gastronomy is seen in quite a few of the drinks and some of the food too. The staff are knowledgeable, friendly, stylish, and attentive – across the board. I am quite a fan of one of their bartenders, Tejas, who creates fantastic drinks behind the bar. 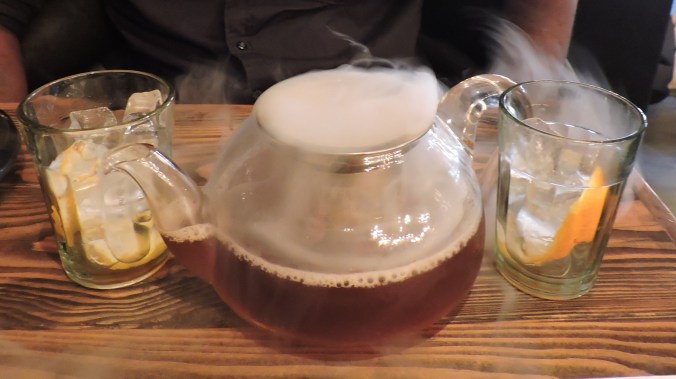 Oh the drama! A kettle with a billowing cocktail made from tea, vodka, citrus.

The food is decidedly Indian, with flourishes of fusion. After a couple of visits, and attending one of the slew of pre-opening parties, I came away with an appreciation for the drinks and desserts in particular – they’re cool, presented with more than a swig of theatricality, and with nice balance of flavors. In terms of the food, it came across as a mixed bag: some really great taste and presentation, as well as some that were flat. I think the latter happens with their vegetarian offerings – be it the bhajjis or chaat and such. Their non-vegetarian appetizers however, are very good. Now, since I happened to go for lunch, and since my camera was cooperative and the lighting kind, I have, for once, a number of good pictures, so am going to let them do some of the talking! 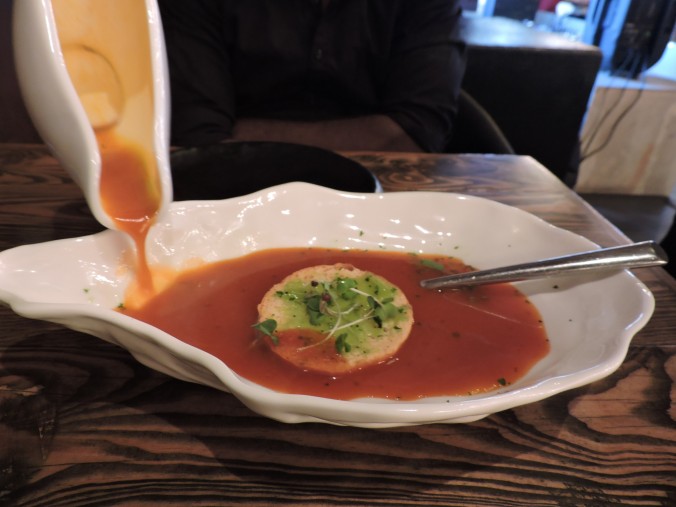 At the behest of our server, we began with the Tomato Soup, served with a Pepper and Basil Rusk and micro greens, which was poured from a jug into a scallop-edged bowl – great taste and of course, presented well. The next dish is one that has become ubiquitous with Farzi – Tempura Fried Prawn. Now I like the taste of the dish, but every time I eat it, I find myself not sure of the texture – its gooey and the foam on top just adds to that feeling. The next appetizer however, erased any doubts – the Coorgi Pandi Ribs were divine – texture and taste wise. Suffice it to say, my dining companion, who usually desists from eating pork, kept pace with me, bite for bite! 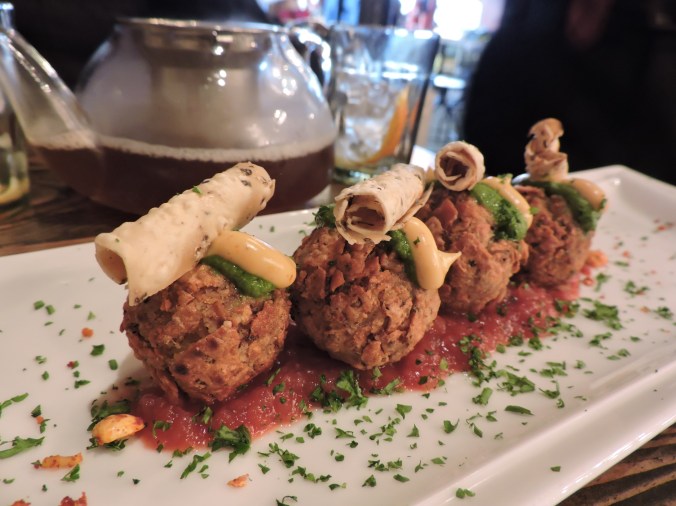 The Dal Chawal Arancini is one of the fusion veg offerings that I do like – it is a pretty plate, and the arincini-ing of a simple dal and rice prep, with the teeny roasted papad rolls topping, makes for a crunchy and tasty morsel. The Chicken Changezi Quesadillas that came next were another interesting looking plate and tasted nice too, as did the Mutton Irachi Pepper Fry, served with Malabari Parantha. But the standout for us, surprisingly because neither of us usually go for this, was the Bheja Fry served on a an Appam – a must try for anyone who likes brain. 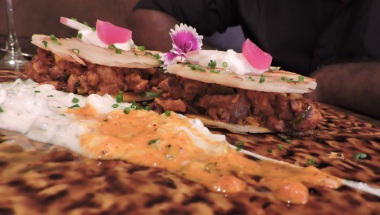 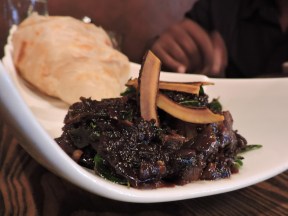 We were full with both food and drink, but desserts were forthcoming and we were not going to send them away! If you’ve been to or been told of Farzi, their Bailey’s Lollipops are a cool innovation and much loved. Like the Hajmola Pops which are brought to the tables as a palate cleanser, these too are served in what looks like a ceramic tree. The brilliant finish to our meal, however, was provided by the Parle G Cheesecake: it was a perfect cheesecake filling encased between two Parle G biscuits – childhood nostalgia from the latter, with the sophisticated cheesecake flavors making for happiness. The other dessert was pretty with a sugar structure topping it – a Tres Leches Ras Malai. And then because we had to end with a real flourish, the most dramatic of all their desserts, called Milky Way, was served to us. Various sweet elements in the shape and aspect of the galaxy for which it is named, were set on a large slab, and then with the help of liquid nitrogen, literally brought to life! See the video here to fully appreciate this wonder! All in all, a meal at Farzi is as much about the theatricality and the presentation as it is about the actual food – and you’re sure to have a good time!