What does one do when one gets an invite to partake of a 7 course dinner conceptualized, curated, and cooked by Gary Mehigan, MasterChef Australia judge and restaurateur? Well, one says yes with alacrity! Grab the friend for whom meeting Gary is akin to meeting Amitabh Bachchan for a Bollywood fan (his own words!), get ready and head over to The Ritz Carlton Bangalore in anticipation of a great meal and an exciting Thursday evening.

The one off event was the launch in India of the CEO Series 2016, presented by American Express in association with BMW and Etihad Airways. Held across three cities – Bangalore, Mumbai, and Delhi, we in Bangalore were the first on the list. In attendance were well-known CEOs including Nandan Nilekani and Chetan Maini, a few of us from the food blogging community, and other influencers. The premise of the event was to bring together folks from technology, media, business, and finance, and have them interact over a sit down dinner presided over by a favorite celebrity chef, Gary Mehigan.

Chef Gary created the Seven Wonders of the World Menu inspired by his travels and focused on seven different countries, and even though we traversed India, Peru, Italy and more, the meal came together like a pitch perfect song – there was not one discordant note to be found. I am honestly not one to be bowled over by someone’s celebrity status, but I sure was bowled over by this man and this meal! It was a spectacular dinner, one none of us in attendance will likely forget in a hurry, with every course making an impression. 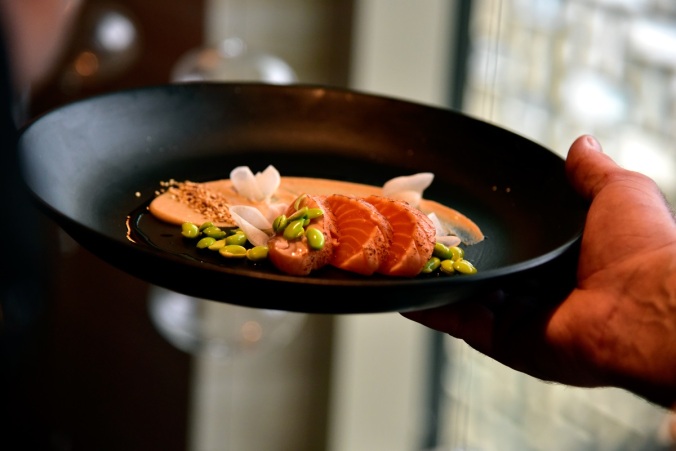 We started in Peru, with Scorched Salmon, caramelized miso mayonnaise, ceviche pickles, edamame. The salmon was out of this world, and so was the miso mayo. Peruvian cuisine has influences of Japanese alongside its South American roots, which made the ceviche and salmon dish a beautiful representation of the food culture. Staying that side of the world, the soup course was a gorgeous Brazilian Moqueca, a fish soup that literally brought the aroma and taste of the ocean to the table.

For our third dish of the evening, Chef took us to Jordan – and I think a lot of folks who were there that night would agree, this dish was the Dish of the Day, though that itself is like picking a first among equals! Compressed Watermelon, that was served as a block, had been infused with spices, citrus and a touch of rose, and served with Jordanian almonds and labneh. The latter two ingredients added some interesting crunchiness and softness to the textures, and the flavor of rose and watermelon worked oh-s0-well!

Now there just had to be an India inspiration on the menu, and this was the Butter roasted cauliflower, a deceptively simple sounding and looking dish that had a depth of flavor. The addition of green fennel seeds and golden raisins gave this a slightly sweet taste, the lovely crunch of the thinly sliced cauliflower on a bed of mash cauliflower worked brilliantly. I also liked the way Chef set up the courses – two seafood, two veg, followed by two non-veg. The Glenlevit Founder’s Reserve was served with this dish, and smooth and just that little bit fiery it was.

Chicken from China was the next to appear, and he elevated a simple White cooked chicken into a gourmet dish. Served with garnishes of spring onion, celery, ginger jelly, and black sesame, and seasoned with soy sauce, ginger and garlic, this was comfort food at the highest level. Our second meat course was Slow cooked lamb, served in a tagine. Shoulder of lamb, toasted grains, daal and pine nuts and kohlrabi made this dish exotic and familiar all in the same mouthful. The lamb had been slow cooked for 14 hours and was suitably tender and delicious. Chef mentioned that biryani was an inspiration for the dish, and it certainly was a one pot wonder! Glenlevit 15 was the scotch to accompany this course.

Conco d’Oro, the Italian dessert, was what we finished with. Given the reference to gold in the name, Chef had used edible gold leaf atop each of the meringues, turning them “golden”. I love all things citrus-y, and especially after a big meal, this dessert of lemon curd and olive oil semi freddo with an orange syrup and both candied and fresh citrus, was the perfect ending to a wonderful meal, and the glass of Jacob’s Creek Sparkling brought it all together beautifully.

Unlike when I met and watched Gary in action during his last visit to Bangalore a few months ago, he was visibly more relaxed, enjoying himself and having fun. We were seated close to the kitchen entrance and he would keep popping his head out to check on the proceedings, as well as interacting with the diners. He offered to pose for photographs, and went a step further, taking people’s phones and orchestrating selfies! I came away from the event marveling at the food, the Chef, and what a fun evening it was…